The Best Day Trips from Albufeira


Albufeira is roughly in the center of the Algarve coast, so there are many places to visit to the east and west of town. There are, of course, the many beaches, but also cultural and historical sites that you might want to visit for a break from the sun. Ideally you’ll rent a car, which allows you to cover several attractions in one day, but public transportation also takes you to some major destinations.

To the east you have the cultural sights and the islands of the cities of Faro and Olhão, and to the west are the beautiful beaches of Lagoa and Carvoeiro, and the historic town of Silves. Further west are some of the Algarve’s most famous beaches, in Lagos. And since you’re in the region, you might even want to go all the way west to “the end of the world,” meaning the town of Sagres, whose Cape St. Vincent marks Europe’s southwesternmost point.

Many of these destinations can be reached by bus, but it requires some careful planning, as there is a limited number of departures. These buses are operated by the Vamus company, which has the times on its website - vamusalgarve.pt 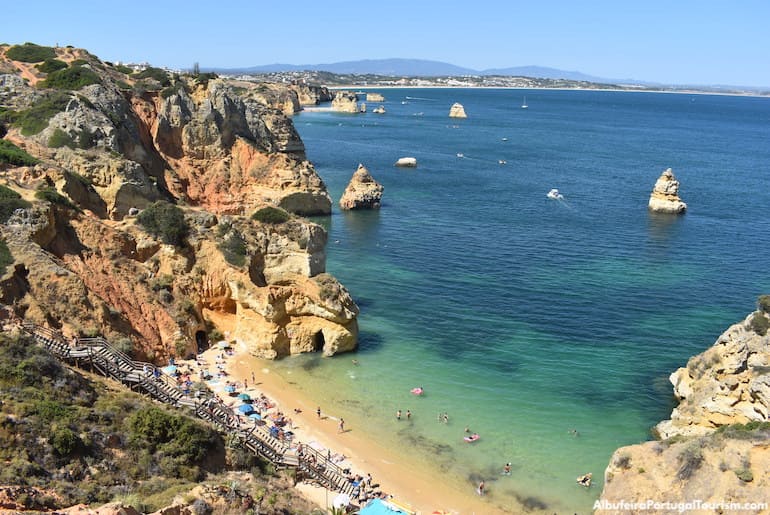 1 hour and 15 minutes by bus or train

Lagos competes with Albufeira for top destination in Algarve. It also has beaches in the center, and they’re some of the most beautiful in Portugal (and even in all of Europe), with impressive rock formations. It’s also an historic city -- it was home to Prince Henry the Navigator, and many of the voyages of the “Age of Discovery” departed from here. It also ended up having Europe’s first African slave market, which is now a small museum. On a day trip from Albufeira you might want to dedicate a couple of hours to the cultural sights and spend the rest of your time walking over the cliffs and exploring the beaches all the way to the stunning Ponta da Piedade headland. Alternatively, take a kayak or boat tour, which takes you to hidden caves and grottoes.
Getting there is quite easy -- trains and Vamus buses 51 and 57 take 1 hour and 15 minutes, terminating at the bus and train stations in the city center, from where you can walk to the attractions in the Old Town and to the beaches. Just avoid the weekends, as there are fewer buses and the beaches are more crowded. 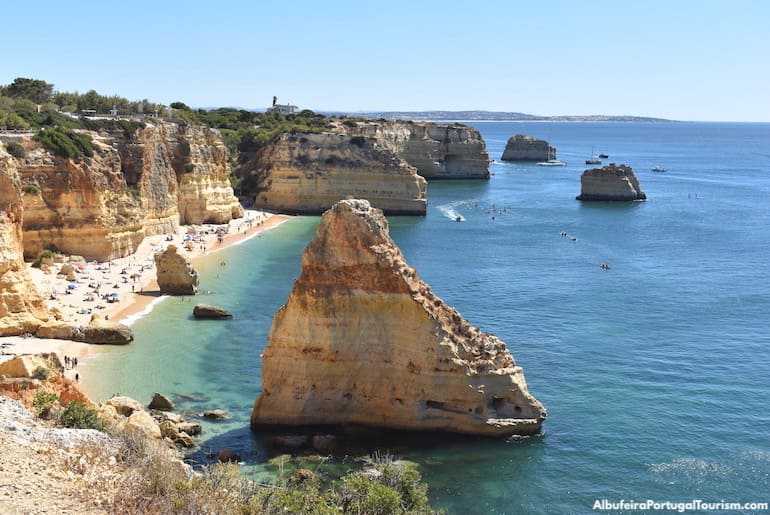 To experience and photograph more of the Algarve’s most beautiful beaches, head to the coast of Lagoa, which includes the picturesque village of Carvoeiro. It’s on this coast that you find Praia da Marinha, which is largely considered the must-see beach in southern Portugal. Nearby is also the cave of Benagil, which has become an icon of Algarve. You can only get to these beaches by car, in about 35 minutes from Albufeira.

See the Lagoa and Carvoeiro guides. 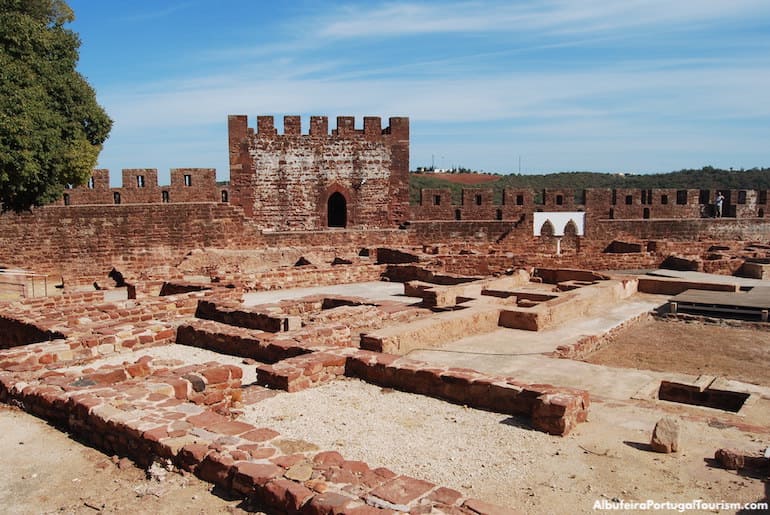 The Moorish capital of Algarve preserves the region’s biggest castle. The large redbrick monument is a major cultural attraction, but the peaceful (and rather sleepy) town, with its cobbled lanes and open-air cafés, is also a charming place to experience inland Algarve, away from the beaches. An archaeological museum and a gothic cathedral take you back to a time when Silves was a major city. Everything can be seen in a half a day, but note that Vamus bus 17 only has about half a dozen departures per day (the journey takes 45 minutes). 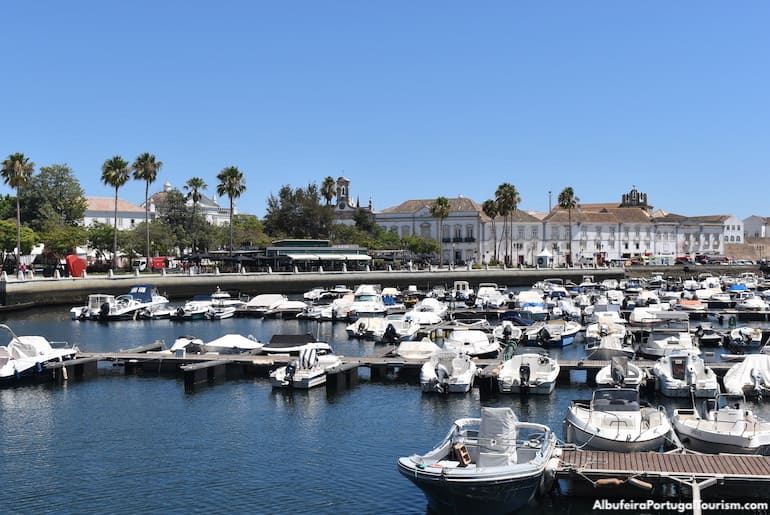 If it’s local history and culture you’re looking for, head to Faro, the capital of Algarve. Its walled Old Town has some surprising attractions, and there’s a deserted island just a short boat trip away. There are two trains from Albufeira in the morning, taking between 30 and 40 minutes. There’s also bus number 9, which takes 90 minutes because it makes several stops along the way. This means that you should plan your itinerary well. The cultural highlights are the cathedral and a chapel covered in human bones (in Carmo Church), and can be seen in a couple of hours. There are more monuments that may be of interest, but you might prefer to hop on a boat and head to an island for the rest of the day. Ilha do Farol and Ilha da Culatra are inhabited by fishing communities and have long beaches, while Ilha Deserta is literally a deserted island (it has just one restaurant) and is an official nude beach. Like to shop at malls? There’s Forum Algarve in the modern part of Faro, which is partly open-air. 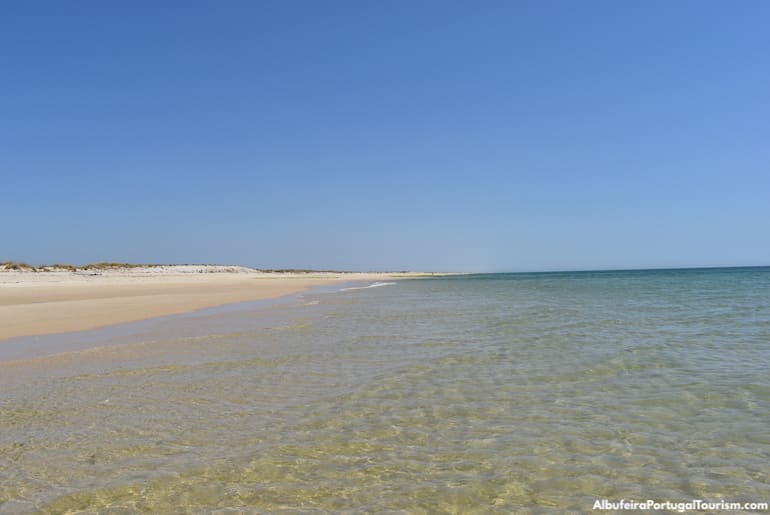 If you liked the islands in Faro, you might want to go to Ilha da Armona from Olhão. Part of it is also home to a fishing community, and another part is also nearly deserted and an unofficial nude beach. While the town of Olhão doesn’t have any major cultural attractions, it is home to the largest fish market in the region, which does attract many tourists. To get there, you can take a train in the morning, which takes about one hour and ten minutes. Alternatively, rent a car (the journey time is about 45 minutes). There’s parking close to the port for the boat to the island. 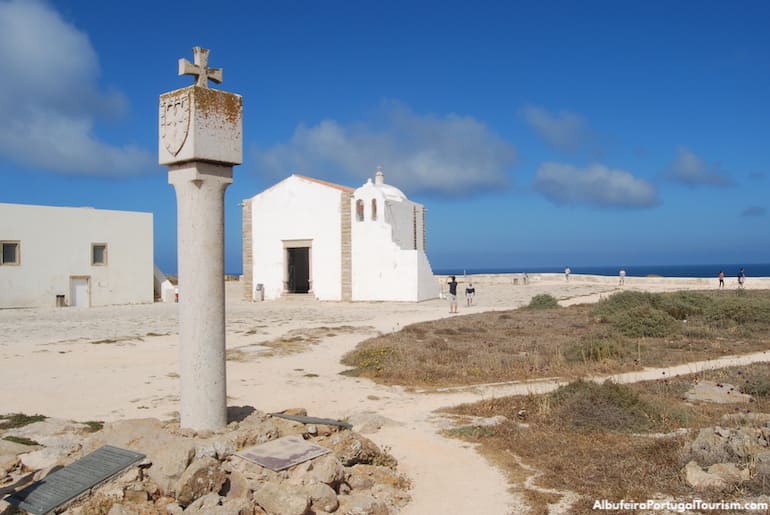 With a car, you can be at Europe’s southwestern tip in just over one hour. Here the beaches are wilder and less crowded, and mostly frequented by surfers and naturists. Don’t miss Prince Henry the Navigator’s fortress and the breathtaking views from the lighthouse on Cape St. Vincent (especially at sunset). If you go to just one beach, make it Beliche, on the coast between the fortress and the cape. 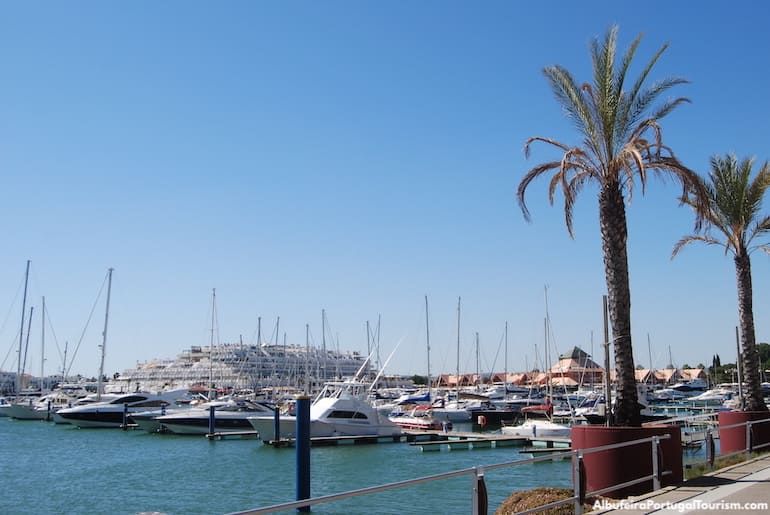 The reason to visit Vilamoura, to the east of Albufeira, isn’t for history and culture -- it’s for a change of scenery and some fun. This isn’t an ancient town, it was built as a resort in the late 20th century, with a large (crowded) beach, a marina overlooked by restaurants and bars, and a casino. It tends to attract famous athletes and local celebrities, and European tourists who like to stay at 5-star hotels overlooking the beach. If you’d like to experience it for a day, take Vamus bus number 9, which goes to Faro but stops in Vilamoura (in 40 minutes).