How to Get to and Around Albufeira 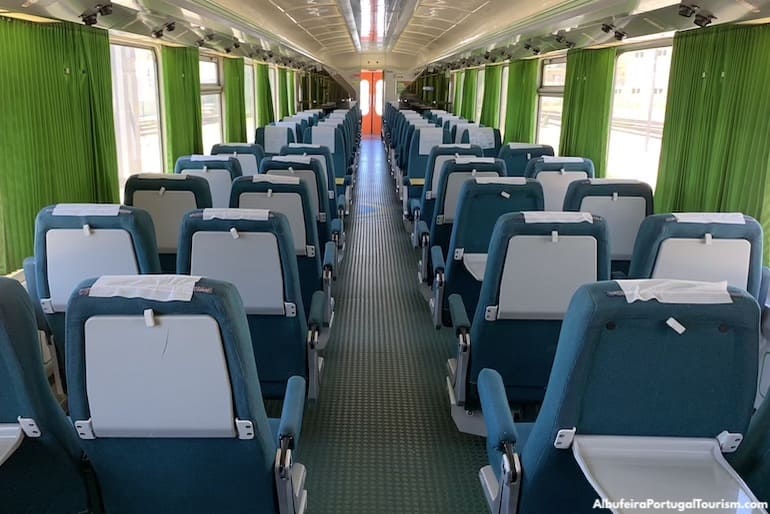 Most tourists arrive in Albufeira by bus or train from Faro or Lisbon. Once in the center of the city, they can walk to just about anywhere, including many of the beaches. The nearest airport is that of Faro, which has several daily flights from Lisbon and is connected to major cities in Europe. This is your guide to getting to and around Albufeira:

Transportation from Faro Airport to Albufeira


Faro’s international airport is 35km (22 miles) from Albufeira, or around 40 minutes by car. There’s a very infrequent bus that connects the airport to Albufeira. The airport is also about 10 minutes from the center of Faro, where there are train and bus stations with services to Albufeira (a bus or an inexpensive taxi from outside the arrivals hall takes you to these stations). More conveniently, you may book a transfer that takes you directly from the airport to your hotel. For complete details, see the guide to going from Faro Airport to Albufeira.

Transportation from Faro to Albufeira


You have the choice of a bus or train to Albufeira from Faro. Both have their positives and negatives, as indicated below: 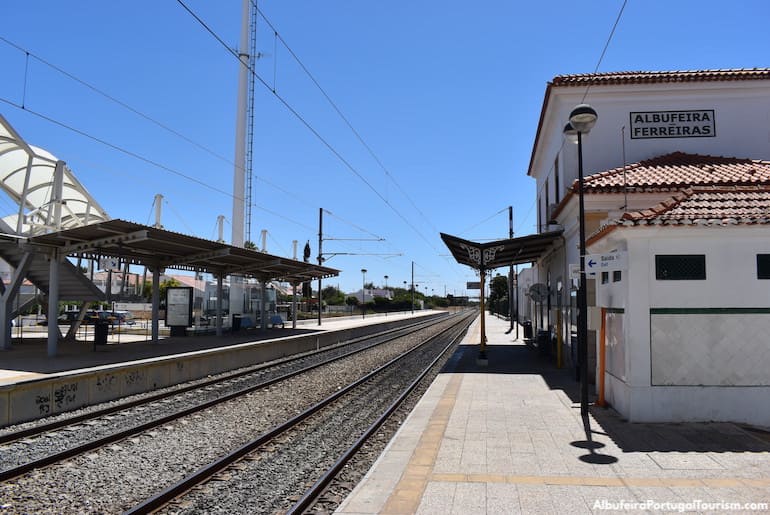 There are about a dozen daily trains from Faro to Albufeira, and the journey takes about 30 minutes. Faro’s train station is in the city center. You can buy your tickets (€3.40) at the ticket office or online at the cp.pt website. This regional line does not assign seats, so you’re free to sit anywhere (there are always seats available). Albufeira’s train station (named Albufeira-Ferreiras) is 7km north of town, so you need to take a taxi or wait for a bus (that passes by every 30 minutes) to the center. The taxi should cost 10 to 15 euros and take about 10 minutes. The bus is of the local Giro network, costs €1.40 and takes about 20 minutes.

The bus terminates closer to the center of Albufeira than the train, but the journey is longer, as it makes a few stops along the way. The tickets must be bought at the bus station’s ticket office. Each passenger is assigned a seat number and all luggage must be placed in the compartment. It’s operated by the Vamus company, which has two services to Albufeira from Faro -- number 9 and number 57. The 9 takes longer (90 minutes) but has more departures (ten on weekdays and half a dozen on weekends). The 57 has Lagos as its final destination but stops in Albufeira in 55 minutes. It has half a dozen departures on weekdays and just a couple on weekends. The bus station in Albufeira is to the north of the center. The 1.5km (close to a mile) walk to the Old Town and the beachfront can be inconvenient if you have luggage, but there are usually taxis, and the ride to your hotel should be short and cost just a few euros.

From Faro to Albufeira by Car

If you’re driving (many tourists do choose to rent a car at the airport - follow the signs to the car rentals at the arrivals hall), take highway A22 in the direction of Albufeira, and you’re in the center of town in about 40 minutes. If you want to avoid tolls, take the free N125 road instead, but it takes longer (about 50 minutes) and there can be traffic (it goes through several of Algarve’s towns).

Taxi or Uber from Faro to Albufeira

Taxis from Faro to Albufeira are expensive - about 75 euros or more. Unless you’re in a group that splits the cost, this isn’t the most economical option. It does, however, have the advantage of taking you directly to your hotel, in about 40 minutes. Uber does operate in Algarve, and the cost to Albufeira is similar to that of the taxi.

Transportation from Lisbon to Albufeira


Although many people fly to Faro when they have Albufeira as their destination, there are also those who first visit Lisbon and then head south to Algarve. Others may even find a good deal on a low-cost flight to Lisbon and, when adding up costs, find it cheaper to fly to Lisbon and then take public transportation to Albufeira. 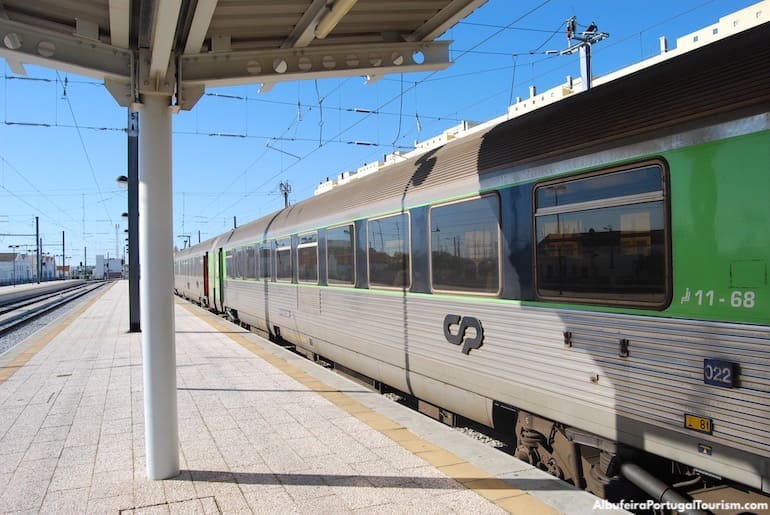 The Lisbon-Faro train stops in Albufeira, but there are just five daily departures (from Oriente Station) -- three of the Intercidades service and two of the slightly faster Alfa Pendular service. On the Intercidades, the regular (“second class”) ticket is €21.10 and the first class ticket is €26.75. On the Alfa Pendular, it’s €22.50 for second class and €29.40 for first class. Tickets can not be acquired onboard, you need to buy them online at the cp.pt website or from the ticket office -- arrive early, in case there are long lines. Tickets come with an assigned carriage and seat number. There are just two trains in the morning, the other three are in the afternoon. The Intercidades takes just over 3 hours, while the Alfa Pendular takes 2 hours and 37 minutes. There isn’t much difference between first and second class, except for more leg room and the availability of power outlets in the first. For the train schedule, see the cp.pt website. 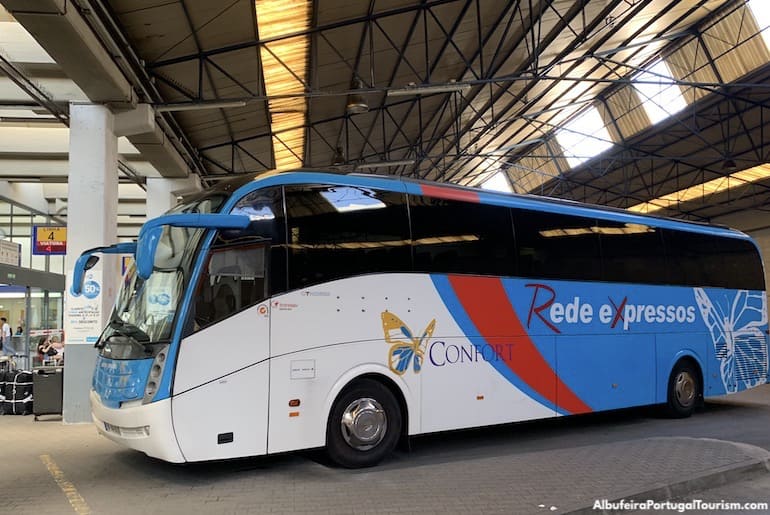 There are three companies linking Lisbon to Albufeira (Rede Expressos, Eva-Mundial Turismo and Renex ). They all use clean, comfortable and modern buses with air conditioning, departing several times a day (more on weekdays and in the summer) from the Sete Rios terminal, although Renex also has departures from Oriente Station. For Sete Rios, take the Metro to Jardim Zoológico station (on the blue line). Outside (up an escalator) is the bus terminal. For Oriente Station, take the red line of the Metro. Unless you’re staying at a hotel by Oriente (in the Parque das Nações district) or heading straight to Albufeira from the airport (Oriente Station is just three Metro stops from the airport), it’s more convenient to depart from Sete Rios. Depending on the time of departure, all buses take 2 hours and 45 minutes or 3 hours and 15 minutes to reach Albufeira. Regular tickets are €20 but there can be last-minute discounts online.
It’s recommended that you buy your ticket before the day of travel, as this is a very popular route. In the summer, you can also expect long lines at the terminal’s ticket office. Sometimes the bus companies offer discounts on tickets bought in advance. For departure times, availability and purchase of tickets, see the Rede Expressos website (it also shows the times and prices of the other two companies, and also allows you to buy tickets for those -- despite the different names, these companies are part of the same group). When buying tickets from the website, you’ll need to provide the number of your passport or national ID.

Lisbon to Albufeira by Car

Albufeira is 250km south of Lisbon, following the A2 highway after crossing 25 de Abril Bridge or the Vasco da Gama Bridge. The journey takes about 2 hours and 15 minutes. 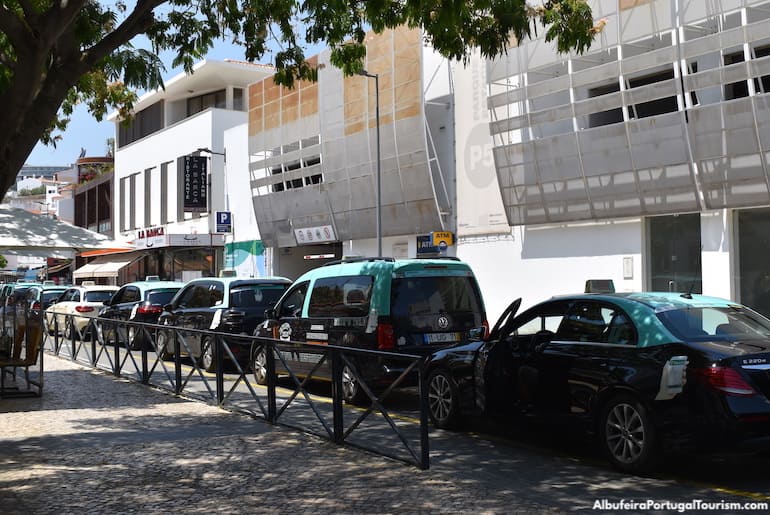 If you’re staying anywhere in the Old Town or central Albufeira, you won’t need a car. In fact, you might want to avoid driving, as many of the streets are pedestrianized and there’s limited parking. However, there are some beautiful beaches outside the center, for which you do need a car. In that case, you can always rent a car for the day. There are, of course, taxis and Uber in Albufeira. They’re cheaper than in other major destinations, and if you split the cost in a group, they can be a convenient and inexpensive way to get around. You’ll find taxi ranks in the center, and especially by major hotels.
There’s a local bus network called Giro. It has five lines identified by different colors (green, blue, orange, red 1 and red 2) and covers the entire city center. Buses depart from the station every 30 minutes, except on Saturdays after 2pm and on Sundays, when they depart every hour. All lines except the orange run from 7am to 8pm (10pm from June to September). The orange line (which is the one that goes to the train station) runs from 6:30am to 9:30pm (11:30pm from June to September). You may buy your tickets from the driver -- a single ticket is €1.40 and a one-day ticket for unlimited rides is €4.00. You may also buy a rechargeable card for €3.00, and charge it with 5 rides for €4.00 or 10 rides for €8.00. This card is sold at the bus station.
For some of the beaches in the outer districts, there are buses operated by the Vamus company departing from the bus station. Number 75 stops by the main ones to the west of town. 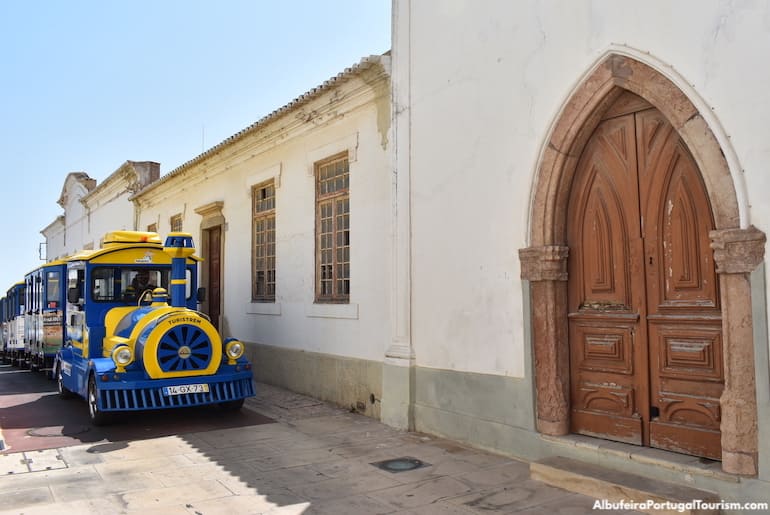 There’s also a tourist train that goes through the center and some of the beaches. It has two routes and the entire journey lasts about 40 minutes. Route 1 has six stops and there are trains every 50 minutes from 9am to 11:10pm. Route 2 has four stops and departs every 40 minutes, from 9:30am to 11:30pm. Times may change and frequency increased in the summer. You can buy tickets for just one or both routes, for just one trip or for unlimited travel throughout the day. 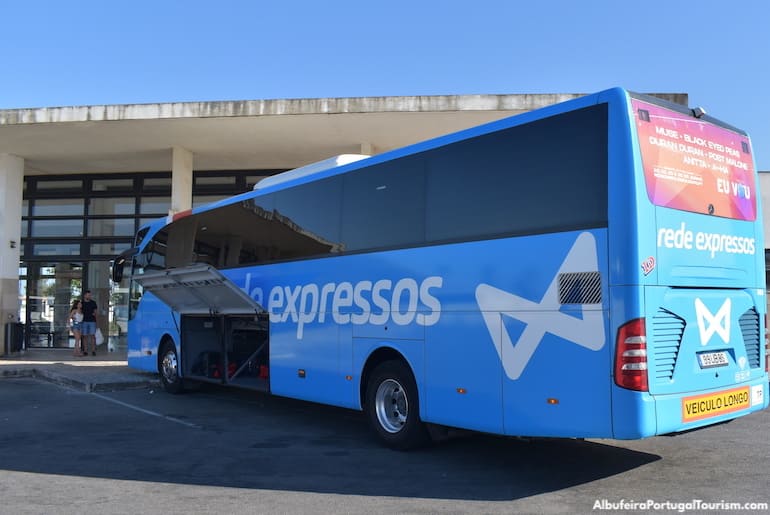 There are two bus stations in Albufeira, both to the north of the Old Town. The main one is in the district of Caliços, by a major road called Estrada do Vale de Pedras. The second one is down closer to the center, on the northern end of Avenida da Liberdade, which connects the modern and the old towns. The first one is about a 20-minute walk from the Old Town and the central beaches, and the second about a 10-minute walk. All tickets must be bought from the ticket offices, except those for the Giro buses that stay within Albufeira, which are sold by the driver (avoid paying with large bills to save time and to avoid being scolded by a grumpy driver). Note that there can be long lines at the ticket offices in the summer, so be at the stations some time before the scheduled departures. From the main station there are departures to the major destinations in Algarve (Faro, Portimão, Lagos), as well as to Lisbon and Seville.